Facts About the Sources of Some “Halal” Meat 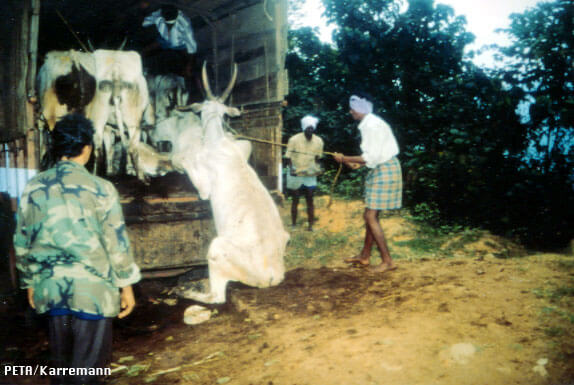 The delegation witnessed Indian cattle, who were barely more than skin stretched over bones, being subjected to severe cruelty throughout the entire transportation process. The animals’ suffering begins with and is the most severe during loading and unloading onto the trucks used for much of their transport and also during the journey by road.

Proper loading requires a workable loading ramp. Sometimes this ramp is permanent, stable, and properly graded to enable relatively easy movement of cattle into the trucks. At other times, ramps are small, uneven, shifting mounds of dirt or cobbled-together pieces of wood subject to rot and breakage. These makeshift ramps very often cause the cattle to slip and fall, injuring themselves and jeopardizing the workers.

Unloading procedures are appalling. While some unloading is carried out on suitable permanent ramps, most frequently the delegation witnessed trucks backed up to the sides of hills. The steep, muddy incline of the hillside caused the cows to slip and fall while trying to negotiate their footing. Many of these falls resulted in broken legs, broken pelvises, and other injuries.

Cows have a wide field of vision (greater than 300 degrees) and will often balk or refuse to move in new situations. They may also be hesitant to move when they become frightened by shadows (much unloading is done at night with artificial light) or by a change in flooring surface or texture.

In most cases, no effort was made to provide a gradual decline for the unloading of the cattle. Instead, the cattle were forced to jump or were beaten and pushed from the high beds of the trucks onto the ground below. On some occasions, we witnessed downed cows and bullocks left at the foot of the truck while other cattle were forced to jump down and land on them, causing further injuries.

All loading and unloading must be done via properly built ramps or loading docks. Cattle must not be forced to jump or be pulled from truck beds. 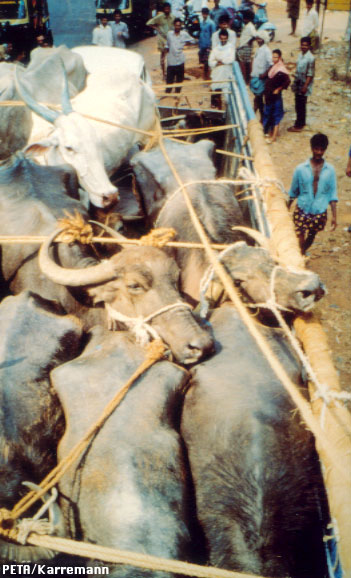 Contrary to Indian law, which specifies the maximum number of cattle permitted per truck, based on the size of the truck and size of the cattle, every single truck we saw was illegally and grossly overloaded.

Overcrowding is particularly cruel when temperatures soar, leading to crippling exhaustion and suffocation. Often cattle are injured or blinded when they are gored by the horns of other animals or when they lose their footing and slip in the speeding trucks. Our team followed one truck in southern India that was going over 80 kph on bumpy, winding roads. The cattle in the truck continuously lost their footing and fell. Many were kept upright only by the ropes through their noses pulled taut over the truck’s frame, keeping their heads up. The cattle also caught their long horns in the slats in the trucks, causing painful neck and disc injuries and also resulting in their horns’ being twisted and broken off. The cattle were also denied food and water during their transport, contrary to Indian law. 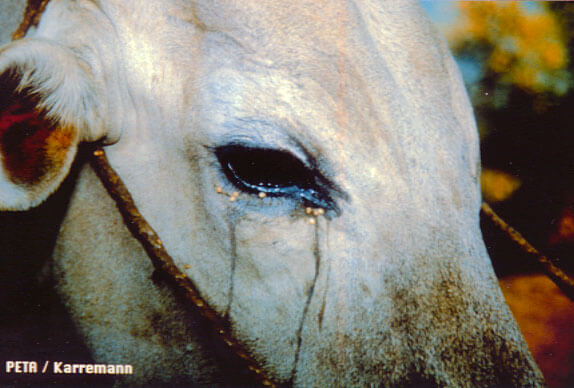 During their journey from auction to slaughterhouse, cattle are often forced to walk hundreds of kilometers to and from trucking points. During these forced marches, cattle who collapse from exhaustion suffer the additional horror of having chili peppers, tobacco, and/or salt rubbed into their eyes to try to move them along. During PETA India’s investigation, the delegates pulled whole and cut-up chili peppers, as well as leaves, from the eyes of countless cattle. Another method of forcing the cattle to move forward, used during the marches as well as in truck transport, is to twist and break their tails. The animals are also typically denied food, water, rest, or veterinary treatment during the forced marches and during truck transport.

Animals injured during transportation or loading and unloading continue to suffer when they arrive at the slaughterhouse. Downed animals languish on unloading ramps in the burning sun without food, water, or veterinary care.

At the Deonar slaughterhouse in Mumbai, the situation was far worse. At the time of the delegation’s tour at 10 a.m., there were already more than a dozen downed cattle. At least four had broken legs and could not stand up. One bull kept trying to raise himself to his feet but could not put his broken right front leg down. He struggled, moving in circles as he tried to get that foot on the ground until he finally collapsed under the heat of the sun. This same bull also had a broken horn from the truck transport nearly half-gone and oozing blood. While the slaughterhouse veterinarian providing the tour noted the bull’s broken leg and stated that a broken horn is quite painful, he made no effort to provide any pain relief to the animal nor to put the bull out of his misery. At the Al-Kabeer slaughterhouse in Hyderabad, the delegation was refused access to the loading area, but from the road it could still be seen that several dead or dying cows had been left around the ramp. At Al-Kabeer and Deonar, no shade was provided at the unloading area, forcing the downed cows to endure temperatures of 100 degrees F with no relief. The delegation observed the cattle left in the unloading area until they died or until they could move themselves when the day became cooler.

Downed animals must be immediately tended to at the time of unloading. Exhausted animals should be given water and food and be humanely moved to a place of shade to recuperate. Animals suffering from serious injuries, such as a broken limbs, should be promptly and humanely destroyed.

Bukhari and Muslim, compilers of the Prophet’s (SAWS) authentic ahadith, both report that the Prophet (SAWS) forbade a quadruped or any other animal to be kept waiting for slaughter. Cattle in India are routinely kept waiting long periods before they are finally killed, and their legs are sometimes even intentionally broken and slung around their necks to prevent them from wandering. Throughout this suffering, they are denied food and water.

Much of the slaughter itself is also contrary to Islamic teachings. An hadith reported by Muslim states, “[W]hen you must kill a living being, do it in the proper way – when you slaughter an animal, use the best method and sharpen your knife so as to cause as little pain as possible.” When he saw a man sharpening his knife in the presence of the animal he was to kill, the Prophet said, “Do you intend inflicting death on the animal twice – once by sharpening the knife within its sight, and once by cutting its throat?” Most cattle killed in India are not afforded the “luxury” of a sharp knife and a quick deadly cut to the jugular. Instead, in smaller slaughterhouses, their throats are sawed and hacked at with dull, small blades. The animals’ legs are often cut off before the occurrence of death, and sometimes the animals suffer the agony of being skinned alive.

Slaughter is not always better in large export operations. While cattle at these slaughterhouses are sometimes provided with some shade and water, the PETA India delegation observed improper and inhumane slaughter. For example, at the Al-Kabeer slaughterhouse in Hyderabad, while the captive-bolt stunning was used properly and effectively prior to slaughter, the delegation found several violations of halal principles. The most flagrant was the savage beating of cattle who were reluctant to move from the holding pen to the killing floor. These cattle were viciously beaten all the way to the stunning area. Such beatings contrast sharply with Islamic teachings. In addition, cattle were killed side-by-side in Al-Kabeer, in full view of one another, in violation of Muslim admonitions to shield the animal from the knowledge of impending death or danger.

The situation was even worse at the Deonar slaughterhouse in Mumbai. Animals driven to this slaughter area were savagely beaten about their legs, neck, and face. These beatings, coupled with the appallingly rough treatment the animals received during transportation, left many of the cattle with open and bleeding wounds all over their bodies. At the actual time of slaughter, the cattle are lined up, bound, and thrown on the floor in full view of all the other animals.

Muslim scholars believe that the following seven practices need to be implemented in order for the meat obtained from Indian cattle to be considered halal:

The Constitution of India prohibits the slaughter of cows and calves, and the Prevention of Cruelty to Animals Act mandates kind treatment. Beating, kicking, overdriving, and torturing any animal is prohibited by Indian law. The transport of more than six cattle per truck or carrying animals upon any vehicle in a manner or position that causes unnecessary pain or suffering is also prohibited. Failing to provide one’s animals with sufficient food, water, or shelter is illegal as is the sale or possession of any animal, without reasonable cause, who is suffering pain by reason of mutilation, starvation, thirst, overcrowding, or other ill-treatment. PETA India’s delegation found that the transport and slaughter of cattle in India violate all these laws, and the violations continue unabated.

It is for this very reason that Indian meat fails to meet halal standards. Islamic teachings are clear in that it is not enough to simply point cows’ heads toward Mecca and cut their throats. The entire process of the animals’ handling, from auction to transport to slaughter, must be kind and humane.

Do Your Part to Help

Muslim scholars believe that the following seven practices need to be implemented in order for the meat obtained from Indian cattle to be considered halal: The information provided on this Web site demonstrates how factory-farmed meat from industrialized countries and even meat advertised as “halal” from India, a country in which the second most popular religion after Hinduism is Islam, violates Islamic reverence for life. It is evident that adopting a vegetarian diet is the simplest and healthiest way in which people can guarantee adherence to the gentle teachings of their faith.

Inform fellow Muslims of the sad plight of animals killed for meat falsely advertised as “halal” by sending a letter to the editor of your favorite Muslim publication and local newspaper.

Write to the Indian Prime Minister and Minister of Agriculture, asking them to work to enforce India”s animal welfare laws and thereby ensure the humane treatment of animals killed for meat in their country.