The Qur’an brought a message that challenged the jahiliyyah (the “Age of Ignorance” among the pre-Islamic Arabs) practices at all levels, including the mistreatment of animals.

Many traditions recount that the Prophet (SAWS) chastised those who cut up and caused pain to animals. The treatment of animals in today’s laboratories, where animals are burned, poisoned, blinded, wounded, and maimed, seems not far removed from this dark period of history. 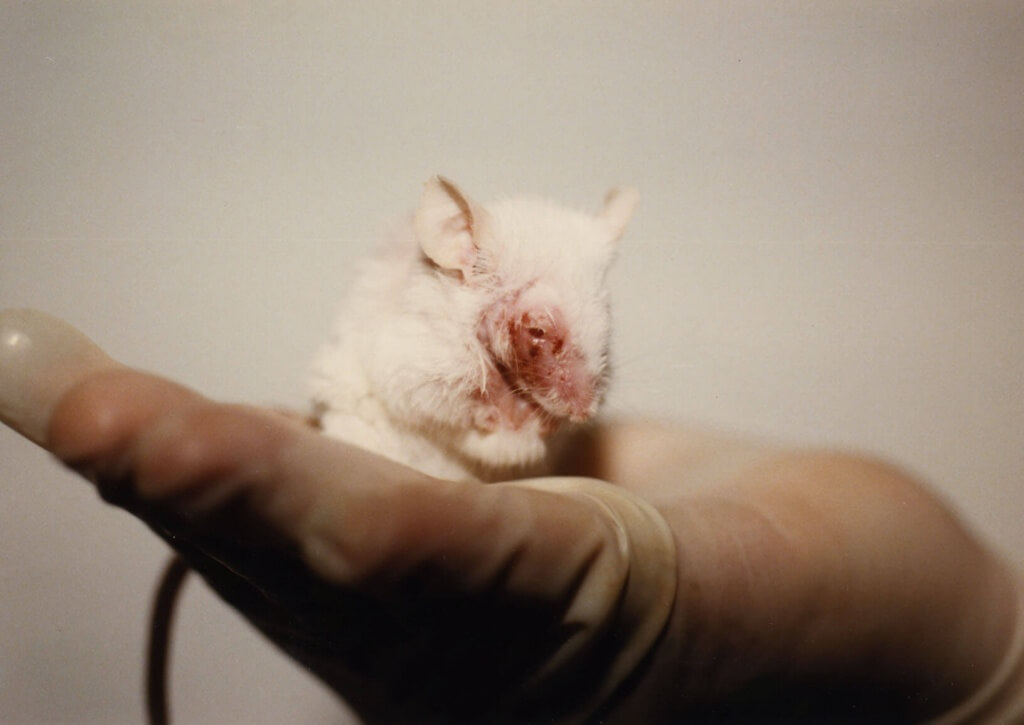 Each year, millions upon millions of animals are subjected to painful, lethal experiments to ascertain the toxicity of new chemicals.

In these tests, liquid, flakes, granules, or powdered substances are dropped into the eyes of a group of albino rabbits. The animals are often immobilized in stocks from which only their heads protrude. They usually receive no anesthetics during the tests.

After placing the substance in the rabbits’ eyes, laboratory technicians record the damage to the eye tissue at specific intervals over an average period of 72 hours, with tests sometimes lasting up to 18 days. Reactions to the substances include swollen eyelids, inflamed irises, ulceration, bleeding, massive deterioration, and blindness. During the tests, the rabbits’ eyelids are held open with clips. Many animals break their necks as they struggle to escape.

Acute toxicity tests, commonly called “lethal dose” or “poisoning” tests, determine the amount of a substance that will kill a percentage, even up to 100 percent, of a group of test animals.

In these tests, a substance is forced by tube into the animals’ stomachs or through holes cut into their throats. It may also be injected under the skin, into a vein, or into the lining of the abdomen; mixed into lab chow; inhaled through a gas mask; or introduced into the eyes, rectum, or vagina. Experimenters observe the animals’ reactions, which can include convulsions, labored breathing, diarrhea, constipation, emaciation, skin eruptions, abnormal posture, and bleeding from the eyes, nose, or mouth.

No law requires animal testing for cosmetics and household products. The Food and Drug Administration (FDA) requires only that each ingredient in a cosmetics product be “adequately substantiated for safety” prior to marketing or that the product carry a warning label indicating that its safety has not been determined. The FDA does not have the authority to require any particular product test. Likewise, household products, which are regulated by the Consumer Product Safety Commission (CPSC), the agency that administers the Federal Hazardous Substances Act (FHSA), do not have to be tested on animals. A summary of the CPSC’s animal-testing policy, printed in the Federal Register, states, “[I]t is important to keep in mind that neither the FHSA nor the Commission’s regulations require any firm to perform animal tests. The statute and its implementing regulations only require that a product be labeled to reflect the hazards associated with that product.”

Testing methods, therefore, are determined by manufacturers. The very unreliability of animal tests may make them appealing to some companies, since these tests allow manufacturers to put virtually any product on the market. Companies can also use the fact that their products were tested to help defend themselves against consumer lawsuits. Others believe that testing on animals helps them compete in the marketplace: Consumers demand products with exciting new ingredients, such as alpha-hydroxy acids, and animal tests are often considered the easiest and cheapest way to “prove” that new ingredients are “safe.”

It is difficult to see how such horrible and ultimately frivolous use of animals in product testing can be consistent with the profound teachings of kindness to animals in Islam.

With the abundance of cruelty-free products available today, Muslims can easily avoid those companies that continue to perform outdated, un-Islamic testing on animals.

There are many reasons to oppose vivisection. One reason is because enormous physiological variations exist between rats, rabbits, dogs, pigs, and human beings. A 1989 study to determine the carcinogenicity of fluoride illustrated this fact. Approximately 520 rats and 520 mice were given daily doses of the mineral for two years. Not one mouse was adversely affected by the fluoride, but the rats experienced health problems including cancer of the mouth and bone. As test data cannot accurately be extrapolated from a mouse to a rat, it can’t be argued that data can accurately be extrapolated from either species to a human.

In many cases, animal studies do even more harm than hurting animals and wasting money; they harm and kill people, too. The drugs thalidomide, Zomax, and DES were all tested on animals and determined to be safe but had devastating consequences for the humans who took them. A General Accounting Office report, released in May 1990, found that more than half of the prescription drugs approved by the Food and Drug Administration between 1976 and 1985 caused side effects that were serious enough to cause the drugs to be withdrawn from the market or relabeled. All these drugs had been tested on animals.

Animal experimentation also misleads researchers in their studies. Dr. Albert Sabin, who developed the oral polio vaccine, cited in testimony at a congressional hearing this example of the dangers of animal-based research: “Paralytic polio could be dealt with only by preventing the irreversible destruction of the large number of motor nerve cells, and the work on prevention was delayed by an erroneous conception of the nature of the human disease based on misleading experimental models of the disease in monkeys.”

In light of even the brief examination of the evidence against vivisection given above, it is clear that animal experimentation does not serve the Islamic duty to preserve and improve human health, and it is especially flawed because of the unconscionable suffering that it inflicts upon laboratory animals.

WHAT SOME MUSLIM SCHOLARS HAVE SAID

“According to the spirit and the overall teachings of Islam, causing avoidable pain and suffering to the defenceless and innocent creatures of God is not justifiable under any circumstances. No advantages and no urgency of human needs would justify the kind of calculated violence which is being done these days to animals [.]”

“If you must kill, kill without torture.”

“God curse the one who has branded it [an animal who had been branded on his face].
Prophet Muhammad (SAWS), cited in Sahih Muslim. According to Al-Hafiz Masri, this hadith is concerned with the unnecessary causing of pain to an animal on the sensitive parts of his body, as well as the disfigurement of his appearance.”

“Do not deal hastily with a being before it is stone dead.”
Prophet Muhammad (SAWS), cited in Kitab al-Muqni

“It behooves you to treat the animals gently.”
Prophet Muhammad (SAWS), cited in Sahih Muslim

“There is no doubt that the Islamic prohibition against the cutting or injuring of live animals, especially when it results in pain and suffering, does apply to modern vivisection in science. We are able to support this interpretation of the Islamic teachings by referring not only to the above-quoted representative Traditions (Ahadith), but also to the Qur’an Majeed. In the verses quoted below, we find expressed the principle that any interference with the body of a live animal, which cause pain or disfigurement is contrary to the Islamic precepts. These verses were revealed in condemnation of the pagan superstitious custom that the she-camels, ewes or nanny goats which had brought forth a certain number of young ones in a certain order should have their ears slit, let loose and dedicated to idols. Such customs were declared by the Qur’an Majeed as devilish acts, in these words:”

It was not Allah who instituted the practice of a slit-ear she-camel let loose for free pasture, or a nanny-goat let loose… (Qur’an 5:106). Allah cursed him [Satan] for having said: ‘I shall entice a number of your servants, and lead them astray, and I shall arouse in them vain desires; and I shall instruct them to slit the ears of cattle; and, most certainly, I shall bid them – so that they will corrupt Allah’s creation’. Indeed! He who choose the Devil rather than Allah as his patron, ruins himself manifestly. (Qur’an 4:118-119)

But from a very practical, common sense point of view, and from the point of view that allows for the Rahma, the Mercy of Allah, to be present, the idea that we should have to take monkeys, chimpanzees, inject them with AIDS, inject them with hepatitis, that somehow by doing that we may or may not find something that will help this poor suffering creature (unintelligible) to serve us in our arrogance as human beings? We are so far above all the rest of Allah’s creation that we can do this? This is big, serious detachment from reality. This is a serious break with common sense. And yet, if you go to medical school, if you are a “scientist”, you will buy this. Maybe some of you have gone to school, in universities, and they’ve convinced you that this is true. Astaghfirullah!

As Muslims we cannot do that. We cannot torture an animal with the idea that we will find some medicine in the process for us. And that is a denial of the immediacy of Allah’s mercy.”

~Hakim Archuletta, doctor of Hikma (Wisdom Medicine) and Homeopathy, on the audiotape “The Islamic Approach to Medicine”, available from www.MeccaCentric.com.

There are many alternatives to the use of animals in laboratory research. Muslims should support the full range of alternatives to animal use in order to follow the Islamic teachings of kindness to animals the most closely.

Dr. Ray Greek provides a comprehensive look into the fallacy of vivisection.