Iraqi Foodie Is a Finalist in the U.S. Hottest Vegan Contest

PETA U.S. is preparing to crown this year’s hottest vegan next door—and an Iraqi social media influencer and food enthusiast is vying for the title after beating out hundreds of other entrants from across the United States to advance to the final round of 10 male and 10 female contestants. 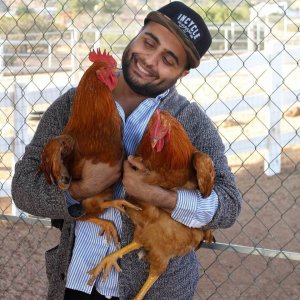 Born and raised in Baghdad and currently based in L.A., Sham Hasan—also known as The Vegan Iraqi on social media—uses his online platforms to show his many followers in the U.S. and Iraq how to veganize traditional Iraqi recipes, including dolma, kubbat halab, and baklava. In just one short year, his Instagram account has gained about 29,000 followers as more people have discovered just how delicious and accessible his recipes are.

“My goal is to show people that it’s possible and even easy to create flavorful, hearty meals that are also kind to animals,” says Hasan. “I want to help people stay nourished and animals stay alive.” He credits vegan eating, along with his three rescued feline companions, with drastically improving his sleep disorder, anxiety, and depression. He hopes to use his social media account to advocate for animals and spread the word about the benefits of going vegan in the Middle East.

“Whether he’s putting his own vegan flair on traditionally meat-heavy recipes or showering his beloved animal companions with love, Sham Hasan is a powerful ally for animals,” says PETA Vice President of International Campaigns Jason Baker. “All the finalists in the contest prove that a clear conscience and a compassionate heart are the most attractive qualities.”

Visitors to PETA.org can help PETA U.S. select the winners—one man and one woman—who will each receive a free vacation for two to Maui, Hawaii, courtesy of Humane Travel. Voting ends at 12 noon EDT on May 14. PETA U.S. will select the winners based on several factors, including vote count. See the full contest details here. Winners will be notified and announced on May 21.