The treatment of animals in the live-export trade—in which animals are shipped thousands of miles to slaughterhouses, where their throats are slit while they are still conscious—is not only inhumane, it also flies in the face of the teachings of the Holy Koran and halal humane-slaughter laws. Although certain criteria must be met to satisfy the requirements of halal slaughter, Muslim teachings dictate that everything possible must be done to minimize the suffering of an animal who is about to be killed. Recently, a breakthrough study has paved the way for making slaughter more humane while still adhering to Islamic law and the Koran. 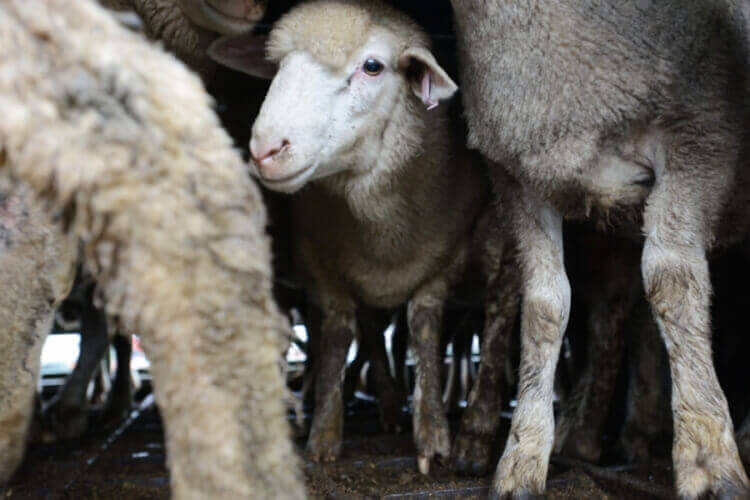 Halal rules mandate, among other things, that an animal must be completely drained of blood at the time of slaughter. Muslims have long thought that the only way to do this is to slit animals’ throats without stunning them first, but a new study conducted at the University of Bristol has proved that stunning does not affect the “bleed-out” in sheep or cattle. In fact, the blood of animals who are stunned prior to slaughter drains at the same rate as that of animals who are slaughtered while they are still conscious and able to feel pain.

This discovery, which has the potential to spare millions of animals immeasurable pain, comes on the heels of a January 2006 undercover investigation conducted by PETA U.S. and Animals Australia that captured shocking footage of the horrendous conditions and cruel treatment endured by Australian sheep and cattle who were exported to the Middle East and North Africa.

Sheep and cattle are packed on extremely crowded, disease-ridden ships, where they suffer for weeks or months at a time and often die of starvation before they reach their destination. Exposed to all weather extremes and stuck amid their own waste on ships that transport as many as 100,000 animals at a time, thousands die en route and many more become ill or injured. Animals who survive the grueling ocean voyage are dragged from trucks by their ears and legs, tied up, beaten, and hauled to abattoirs, where their throats are slit while they are still conscious.

Live export could easily be eliminated by slaughtering animals in Australia and shipping the meat to the Middle East. With more than 50 export abattoirs with halal-certified programs already in place in Australia, there are no barriers to increasing shipments of chilled-meat products to the Middle East in the absence of live-animal imports. The slaughter of each animal is overseen by Muslim officials, and Australian Islamic leaders have approved the practice of electrical head stunning prior to slitting the animals’ throats. As the animals are stunned—not killed—during this process, the practice is both consistent with halal requirements and more humane.

Find out more ways to help save sheep.