Peace and Compassion on Eid al-Fitr

The holy month of Ramadan is a period of peace and contemplation of the suffering of others. At a time when acts of violence seem to fill the pages of our newspapers with relentless regularity, I believe that today, more than ever, we must take individual responsibility for embodying the change we wish to see in the world. When we hear of injustice or cruelty perpetrated against others, let’s look inward, examine our own behaviour, and commit to a non-violent approach in our own lives.

The Eid al-Fitr festivities marking the end of Ramadan present the perfect opportunity to put this philosophy of non-violence into practice by choosing to celebrate with vegan food, sparing countless animals extreme suffering and a painful death. In my view, killing other sentient beings – whose lives are as dear to them as ours are to us – and feeding on their flesh in the name of Allah goes against the fundamental Islamic tenets of peace, dignity, respect, tolerance, justice, and mercy. We can help make the world a less violent, more compassionate place by refusing to do so.

Take a moment to think about the way in which meat ends up in restaurants and kitchens around the globe: after a short life of intense confinement – denied everything that is natural and important to them – most farmed animals are forced to endure a gruelling journey to the abattoir. It’s no wonder that there are numerous accounts of animals’ desperate attempts to escape from the vehicles that are transporting them to their death. Prior to slaughter, many must witness the horrifying deaths of those ahead of them in the queue, smell their blood, and hear their terrified cries. By contrast, the Prophet Muhammad was the embodiment of mercy, and he had compassion for all living beings. He taught his followers to treat animals with respect, kindness, and mercy, because they, too, are God’s creation. 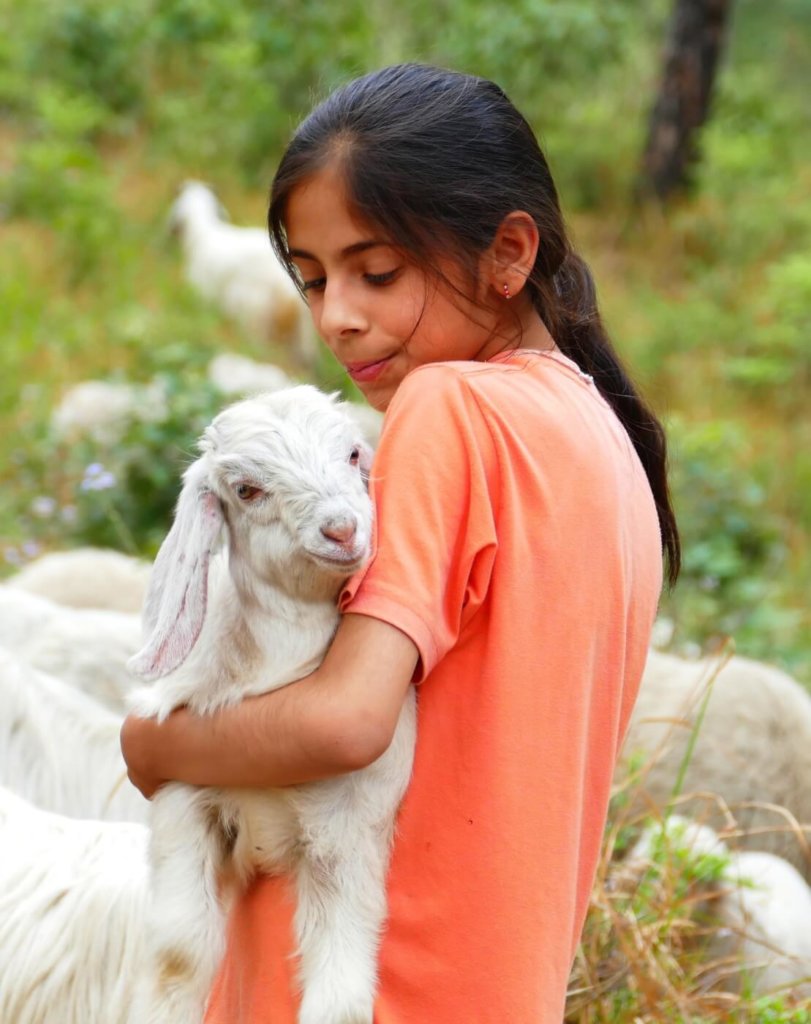 Did you know that if the Prophet saw any overburdened or malnourished animals, he would say to the owner, “Fear God in your treatment of animals”? He did not tolerate behaviour that caused pain and suffering, and he made it known that those who hurt animals must answer to God for their actions.

Every single aspect of the mass breeding, farming, and killing of sensitive and intelligent beings goes against the basic Islamic principles of compassion and reverence for life. Under halal law, animals are supposed to be killed quickly with a single cut from a surgically sharp knife, but eyewitness investigations of halal abattoirs have raised concerns about routine cruelty. Footage from hidden cameras at Bowood Yorkshire Lamb halal abattoir in North Yorkshire showed workers stamping on, kicking, and shouting at sheep. They were also caught on camera hacking and sawing at animals’ throats with blunt knives. In one case, it took five attempts to slaughter a sheep, even though Islamic law mandates that death be instantaneous.

Halal rules also state that animals should never see knives or witness the killing of other animals, in order to protect them from unnecessary trauma. At Bowood, workers regularly sharpened knives in front of sheep and killed animals in the presence of others. They even hoisted and shackled the bodies of the dead in full view of the living.

When we eat animals, we also harm ourselves. Researchers have found that people who don’t eat meat are 50 per cent less likely to develop heart disease  than those who do, and vegans tend to have considerably lower blood pressure. Studies in the UK and Germany have also found that vegetarians are about 40 per cent less likely to suffer from cancer than meat-eaters are. Dr Jane Plant – scientist, cancer survivor, and author of The No-Dairy Breast Cancer Prevention Program – says, “Undoubtedly, the best anti-cancer diet would be to go completely vegan.” There is no shortage of delicious, healthful vegan foods to choose from.

Coming together on Eid al-Fitr should be a celebration of life, not death, and I encourage my Muslim brothers and sisters to celebrate this year by respecting all Allah’s creations, just as the Qur’an teaches us to. You’ll find many mouth-watering, health-promoting recipes at PETA.org.uk. Eid mabrouk!

Mimi Bekhechi is director of international programmes for People for the Ethical Treatment of Animals (PETA) UK.